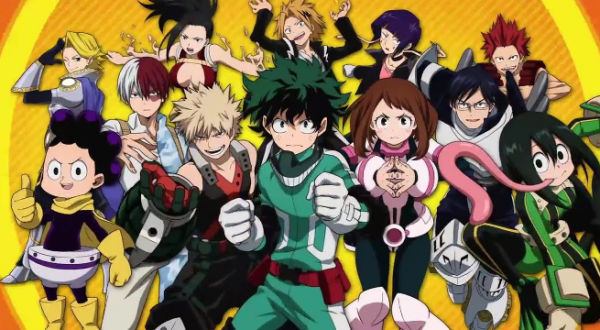 The superhero anime series My Hero Academia brings us to a world where quirks are an everyday chore which means that heroes and villains are confronting each other on a daily basis. In the series, the villains, use their powers for destruction or evil gains, while heroes save the day. In order to gain eligibility to become a hero, characters must graduate from the UA school.

My Hero Academia is the “magic high school”. The students of hero class 1-A get the limelight at UA. We know everything about the teachers, and we loved the Sports Festival arc sequence, but the little details are what that brings life to a place like UA to life. Here’s what we wonder about being there. Some curious answers to the burning questions will be revealed as you read further:

What about the characters without a quirk?

We have seen class 1-A and 1-B only in the sports festival arc, but are there any other classes or not? The series revolves around the most elite of all classes with 20 young rising superheroes including main characters like Izuku, Katsuki, Fumikage, Shoto, Ochaco and more. The class is comprised of 6 teachers which are the homeroom teacher, English, foundational hero studies, modern literature, modern art history and math teacher. What about the students that are not saving the day wearing a cape? Are they only divided into only two classes? This leaves us in the curiosity that if there are more than 2000 students in the school, and the cafeteria and hallways are filled with them, do they also possess any powers or not? There contains many students without quirks, so how do they survive in a school with many heroes?

Is there a band or music classes?

What is life without some music? This guy is Present Mic loves radio and DJ stuff, even throughout the Sports Festival. Louder is better for him, and we would like to know if UA has a music class to match or is there any band there?

Did you join your high school’s music band? It is incredibly entertaining to play a musical instrument with your age group and class fellows and create some melodious music. If UA’s non-heroics students can’t have fun practising hero work, they can at least make some noise with their music.

Mina Ashido is undoubtedly having a fun time. This girl did fine at the Sports Festival, and we bet she will also love to join a new soccer or volleyball team at UA. Sports are a great workout and show sportsmanship to students.

There are many parts of high school life that we’re not sure if they are existing in the UA, and that includes good old sports. There can only be so many quirk fights, so why not fill the stadium for a tennis match or soccer game in between battles?

Aizawa is one strict homeroom teacher, and we are sure that he would be rapid to hand out punishment to any provocative students. So maybe he gives out a lot of them to make an impression and discourage bad behaviour before it starts because he is also a new teacher.

Detention is not entertaining, but in works of imagination, detention scenes can be artistic and matchless, such as requiring a student to help with chores, until a conspiracy twist happens! If you act out in Aizawa’s or Vlad King’s class, you’re in for the detention.

Night-time is the art teacher at UA, and we’re sure that her classes are much fun. She is emotional and creative, and she has a hysterical personality (and she loves kids). We are confident that her art classes are an exceptional educational experience, but we have more to see further.

Art class is an outstanding time to express yourself and an outlet for students to let their creative flow run. And if you own a quirk, that can add some exclusive viewpoints to art, such as using Mina’s acid or Shoto’s fire to make a matchless sculpture. We can picture Bakugo getting annoyed with this class and throwing paint onto painting in Jackson Pollock style.

Are there any nurses besides Chiyo?

A petite older woman with an unusual quirk is imagined as a nurse. She can mend flesh with a kiss, including healing broken bones. Her power is limited; however; major damages still need bandages, even after the application of her healing quirk. There aren’t many medical staff noted in the series. Typically if a character is lying down in the hospital bed about to die, they do not show what happens with the staff. Chiyo who is the nurse was given the quirk gift to heal others. It allows for human bodies to heal at an abnormally fast rate. She however can’t grow any lost body parts.

Are any villains a former student of U.A High?

Many villains are untouchables who think that they never have their place in society. Often, they use their quirks to snip, hurt others, and in general wreak chaos on society for their advantage. They’re the opposite of upright citizens. Even worse, someone such as All for One will steal other superheroes quirks to use for evil deeds.

So this begs the questions, are any villains unpleasant UA villains who were outcasts that were told, “you’re not good enough?” We can depict a student getting kicked out of the school, and they try to show themselves by becoming influential on the other side of the law. Maybe even the likes of Dabi or Mustard once reflected going to UA or also applied, until other factors changed the course of their lives.

When was U.A. High built?

Technically this is a query about the school, but we’re interested. Imagined is a memory of Eijiro Kirishima, and by now, we’ve seen recurrences for many characters at UA, even All Might, Present Mic, and Aizawa. What’s complicated is defining the time frame for all this, since we see a future situation with high-tech robots. It isn’t clear if the older characters such as All Might and the other teachers attended a super hero school or even how they were able to master their quirks. Without the proper guidance or training, it would imaginably be difficult to master or control a quirk to it’s full potential.

UA must have been constructed right after quirks ongoing seeming, but we can’t figure out a period for this. The 1960s? The ’70s? Later? Likely, this school hasn’t even been built yet in the real-world timeline at all.

Are there any parent teacher meetings?

It was one tough thing for All Might and Aizawa to call the families of class 1-A’s students and clarify the villain danger to them, to check whether the families still want their children to continue at UA. But this is the only time we’ve realized much of the parents thus far-off.

Real schools have parent-teacher discussions all the time, and we want to see sections of Mitsuki Bakugo or Inko Midoriya or Kyoka Jiro’s cool parents showing up during parent-teacher meeting day. Maybe U.A. is poles apart from when the parents joined this school. Or they may be jealous that they never got to enroll here when they were younger! We know that sometimes parents can be worried about their children getting hurt from training or battles in school. For example Inko Midoriya was worried about Izuku getting hurt during training and even begged him to not fight anymore. Or Chiyo the nurse scolding All Might for pushing Izuku so hard after training.

Is there a student newspaper?

Do you remember this from your high school days, too? Many high schools had a newspaper controlled by students, and they can take a reporting class to learn how to character out objects about student interests and campus events.

Why not U.A. High? We will bet that some of the students in the mass communications class are learning to become journalists, and with the likes of class 1-A around, those captions must be unbelievable. Such as attention of the Sports Festival: “KATSUKI BAKUGO OF CLASS 1-A WINS TOURNAMENT, REJECTS MEDAL”. Every high school needs a newspaper club especially in a superhero school! They need to report all of the cool displays of powers that go on in class.