With over 900 chapters and 800 episodes, the One Piece fans had a long journey with us. There has been a wide variety of long anime series in the past; however, One Piece always ruled with its everlasting arcs loaded with fantastic storyline and detail. There are numerous small stories and colorful characters that make up a bigger picture. Plus, the world-building has always been an enjoyable part of the series.

Though several stories have complex characters and fantastic stories. But One Piece stands at the leading position due to its heart-breaking tales. Our first introduction to this series makes us feel that this series will lead us to fantastic adventures. Especially the lighthearted events that revolve around Luffy who was becoming the king of the pirates. However, we get several heartbreaks when characters go on journeys for vengeance and justice. We have witnessed plenty of heart-wrenching moments in One Piece. A list of these devastating scenes are enlisting below:

The death of Ace 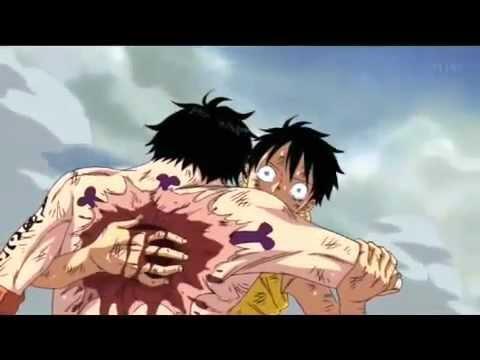 One of the saddest moments of One Piece is Ace’s death. The pirates have succeeded in freeing Ace, but he chose to sacrafice his life to save Luffy from Admiral Akainu. Ace’s death was one of the most suprising events in the One Piece series. In this scene, we not only saw Luffy pushed to his very limits, but we lost a beloved character as well. Ace is the brother of Luffy who died while trying to protect him from Akainu. Indeed, it was such an intense moment to see Akainu lunging for Luffy. And realizing that Ace had punched straight through his chest. None of the characters recovered from this because we’ve not seen his death avenged yet. In the end, Ace wanted to give Luffy the opportunity and desire to grow stronger. The impact of Ace’s death lead to Luffy to train harder during the time skip to come back much stronger.

The last moments of Corazon

Corazon’s death brought tears to everyone’s eyes. Doflamingo had figured out that his brother Corazon had betrayed him and gave the Ope Ope fruit to law. Sadly Doflamingo shot Corazon a dozen times. Before he was found, Corazon used the devil fruit powers to mute Law, so that he could escape and protect him from harm.

The fact that this was the character we barely saw in the series. Corazo is considered as the mute brother of Doflamingo because he acted dumb, in reality, he wasn’t. A series of events disclosed the illness of Law. Crazon dedicated himself to cure him. We came to know later that he was working with Marines for stopping his brother. Before his death, he smiled at Law and told him that he was loved.

The fight between Luffy and Sanji

We found out about Sanji and his horrific past related to his family in the Whole Cake Island arc. His brothers were cruel, his father was abusive, and his sisters had no option but to follow them for their survival.

Luffy was resolute to get his chef back; however, both had to fight it out – a result that was heart-wrenching for fans. Sanji was the chef who thought that if he would fight hard, Luffy and his crew will leave the island forever. So, he tried to save everyone. The fight ends with a defeated captain and Nami who was in anger slapped Sanji across the face. Then comes ahead Straw Hat captain, he announced that he will starve until Sanji returns.

Biding Goodbye to the Going Merry

Our journey truly began from the Going Merry. The most crew was there on the cruise at the time we got it, and then we saw the entire East Blue with it. As a present from Kaya, it became the first home the Straw Hat Pirates shared for numerous chapters and episodes. However, after a long life that was full of damage, she could go no further with the fans. We viewed that the Straw Hats gave her the Viking funeral after Enies Lobby. This end began a new start, but it was devastatingly heartbreaking to watch the first ship go. Later Franky and Iceburg would build their new ship after the time skip called Sunny Round.

The backstory of Chopper

The Chopper had the most devastating backstories among all the Straw Hat Pirates. His life was full of miseries. He was born with a blue nose and considered an outcast for eating the Devil Fruit that eventually turned him into a humanoid creature. After being continuously mistaken as a yeti, he was left out on his own. He endured a lot of injuries, but then Dr Hiluluk rescued him. He taught him everything. Later it was disclosed that he is seriously ill. Chopped thought that Dr Hiluluk would be alright by eating Amiudake mushroom. But, he died after eating this fruit as it was a poison. The Chopper was scattered. Seeing such a cute reindeer going through so much is literally a heartbreaking scene for fans.

The demise of Whitebeard

As Whitebeard is the most powerful pirates on the seas, so his death was undoubtedly the passing of an era. There was a series of events which lead to the death of Whitebeard by Blackbeard and Akainu. The later scenes were loaded with a lot of emotions.

Whitebeard was the stepfather of Ace, and his final words for him were:

“Just answer one question for me, Ace… Was I a good father?”

When White Beard died at the war of the best, he told Black Beard that he is not the guy who will succeed Gol D. Roger and carried his will and One Piece does exist.

Well, losing a famous character is always hard and analyzing how much Whitebeard meant to the Ace and the pirate world; it is even harder.

Law was born in White City that was named after the Amber Lead mine. Causing a huge health risk for the population, it was poisoning people. The World Government was well-versed about it but never revealed it. Instead, they decided to exterminate the poisoned people. His parents were shot before his eyes plus the hospital was burned to ash in which his sister was hospitalized. Law watching his entire family dying dut to poison. The saddest part was he was also sick. He knew that he would not survive, but to his surprise, Corazon saved him by giving him Op-Op Fruit to eat. The scenes were so emotional for One Piece lovers.

After a long and thrilling journey with the new friend of Straw Hat, Princess Vivi, a lot of people wondered that would she consider joining the crew. However, in the end, she chooses to stay and informed the crew. When they were sailing away, she asked them whether they would remember her or not. For which Nami warned them that Marines are watching them and if they responded, Princess Vivi, will be considered a criminal. Despite labeling her an outlaw, the crew raised their arms with an “X” marked on it for showing solidarity with her. So many feelings and emotions in just one scene, leaving Vivi and conveying their friendship like this are not forgettable.