Everyone who is into pop culture undoubtedly meets these little characters from the Funko Pop series. When these small vinyl collections hit the market, they were wildly trendy overnight. Funko began designing Bobbleheads in 1998 and later combined it with different toys and figurines.

The Funko Pop vinyl figure is a collection of many action heroes such as Minnie Mouse, Toy Story, Star Wars, Games of Thrones and other well-known characters. Some of them are even sold for thousands of dollars. It is seen every time at the Comic-Con exhibition in San Diego, that some characters produced in limited quantities are immediately sold out, such as “Glow in the Dark,” DC Universe Green Lantern, and now it is next to impossible to find them.

In this blog post, I have listed some of the most valuable and expensive Funko Pop characters of all time.

Everybody loves Storm Trooper, and here you will see the Storm Trooper baddy, Shadow Trooper, all decorated with pure black and showing harsh and angry faces. In 2015, it was released at the San Diego Comic-Con when only 480 figures were released. Because “Star Wars” is still one of the biggest films ever, and collections are part of this phenomenon in popular culture, that’s why this Funko Pop is immediately sold out. On the official Funko website, this pop is valued at a whopping $1210, but some have purchased this for $2025! If you’re unfamiliar with the Shadow Troopers, they are elite storm troopers who specifically served the Galactic Empire to fight against the Rebel Alliance. They usually overwhelm their enemies by attacking in large numbers and are equipped with a cloaking device to roam invisible for stealth missions.

In the movie Solo: Star Wars, Darth Maul appeared in hologram form speaking to Qi’ra and looking for a ship. Part of this craze fanfare has to do with the fact that most of the star wars universe fans thought Darth Maul had died from Obi-Wan slicing him in half in the Phantom of Menace. He ended up surviving and building his own empire as the leader of Crimson Dawn.

This Funko Pop is glow in the dark, so you can see all of the intricacies on his face and body when the lights are out. Although Maul first performed in The Phantom Menace in 1999, it didn’t start appearing until SDCC 2012 with a limit of only 480 pieces. It’s worth 2,630, and the last eBay auction in September was sold for over £1,800. On eBay it’s currently selling at an asking price of $2,050 and on StockX selling at $2,600!

When the movie of the same name was released at the box office in 2011, the public didn’t have the most raving reviews. However, this glow in the dark figure of Green Lantern from SDCC 2010 seemed to knock it out of the park. This pop has an estimated value of $2,170, with 28 sales on eBay over the course of 90 days ranging from an average of $1402.95 all the way to a high of $2,999. From an aesthetic point of view, this is an attractive pop, and given the metallic appearance of Sinestro, it costs about $270 to produce. Since there are only 240 pieces available, this one is a rare find. Success is like finding a solid joke in the movie. So that’s impossible.

This version of the Green Lantern in Hal Jordan, where he crashed into an alien crash site and was appointed by Abin Sur to be the Green Lantern. In the film, Jordan is faced with the daunting task of battling Parallax, the antagonist who is a parasite entity that embodied fear. In the end, Parallax was caught in the suns gravitational pull and was destroyed thanks to Jordan. 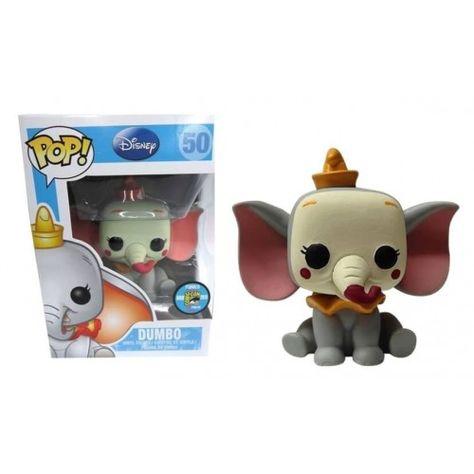 Disney is another boom in pop culture. Most people know the most famous Dumbo elephant of all time. When this sweet elephant shaking his head fell on the Comic-Con shelf in 2013, the elephant clown fans already went crazy with clown paint. Currently, the estimated value of this pop, is $7,430 with 19 sales in the last 90 days averaging at $3,357 and as high as $12,000! One reason the price is so high is because there are only 48 of these pops out there!

This movie revolves around the Medici Brothers Circus, where a young calf elephant has unusually large ears. Though Holt, the director of the circus tries to hide his ears, they end up appearing and the crowd mocks him calling him “Dumbo.” In one scene, Dumbo plays the role of a firefighter clown and ends up being pushed down the platform falling into a huge mess. Dumbo feels embarrassed, but the audience loves him as the goofy clown act.

Toy Story 3 ended the trilogy of that time, and Lots-o Huggin Bear became a powerful opponent of Woody and their group. He is a foe who rules Sunnyside Daycare similar to a prison. He is famous for riding a dumpster truck and forces Buzz, Woody and his friends to be trapped in the catepillar room of the daycare facility. Lotso tries to kill Woody and their friends using the incinerator, but it backfires and fails. In the end, he is taken away by a garbage man who has an affection for Lots-o Huggin bears and is devastated by his failed attempts.

This metallic genie was released on SDCC 2013 with 480 pieces available. The value of this pop is estimated at $540 and has sold 330 online in the last 90 days ranging from an average of $343 all the way to a high of $1,600. The metallic texture and feel of this pop adds to the overall rarity of this pop and would be a great addition to any Funko Pop collector.

The Genie in Aladdin is a crucial character to the development of the plot. He has the ability to shape shift and grant any one a wish who holds the lamp. However he is bounded to stay in the lamp unless someone releases him. In the film, he first serves Aladdin, where he is initially betrayed by him. Later, he is ruled by Jafar, the antagonist as is forced to grant wishes of evil. In the end, Genie saves the day by tricking Jafar to become a genie thereby trapping him into a black lamp. The genie hopes to grant Aladdin and Jasmine love, but instead Aladdin returns the favor and sets the Genie free, something he’s been always longing for.

Released previously this year and only offered by SDCC and Toy Tokyo, this brilliant and adorable version of the Dark Knight aroused fanaticism from collectors. Originally sold by the exclusive Comic-Con Pop (around £15), its value has risen sharply. It is now worth $250. In the last 90 days, there have been 661 of these pops sold with an average selling price of $379 and sold as high as $810.

Rivaled by only Superman, Batman is likely the most popular superhero in the DC universe. Batman is the ceo of Wayne Enterprises but more importantly the protector of Gotham City. His real identity is Bruce Wayne. What makes Batman so unique is that he doesn’t have any superpowers but rather he simply uses his intellect, detective skills, fighting abilities, and gadgets to beat his enemies especially the Joker. Batman has been killed many times such as the time when Darkseid seems to kill him. However, the beam actually sent him trapped in time where he was lost. Batman appeared in the Paleolithic era, Puritan witch hunting era, Pirate era, Wid West era, the 1980s and even the present day. Safe to say Batman is quite the resilient and fascinating character. 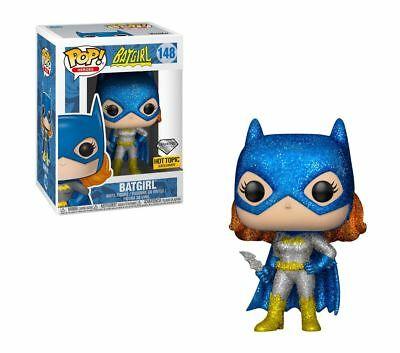 Batgirl is another metal version in the DC series and is one of the many rare comics in the DC Universe. This time Batgirl replaced the standard Batman limited edition and set the trend by not participating in the Comic-Con program. This version is part of an extensive DC product line is extremely rare, so expect about a monthly rent for using the property. Currently, this pop is valued at $840 and has sold 102 in the last 90 days. The average sale being $606 and has high as $1,100.

Batgirl is one of Batman’s many sidekicks similar to Robin in the batman family. During the day, she hides her identity as an librarian, but really she is a vigilante type of super hero who is an excellent detective and martial artist. There have been many adaptations of Batgirl since being created in the 1960’s. However one of the most famous moments is quite tragic where she was shot by the Joke and paralyzes Barbara Gordon (batgirl). In the 1990’s and early 2000’s, she is revived with a new persona called the Oracle where she gains genius level intellect and becomes a hacker. Furthermore she trains her upperbody strength to fight despite using a wheelchair.

The infamous death of Ned at the hands of King Joffrey heralds the horror of killing our favorite character, so could there be a better tribute than pop figure with a drooping head? Funkos produced 1008 headless Neds and released them in 2013 at the San Diego Comic Con. The estimated value is currently at $910 with 480 sales in the last 90 days averaging roughly $786 and as high as $3,000! I mean how cool is this Funko pop right?

Ned Stark is the head of the House Stark and rules the region of Winterfell. He was an honorable hero who would do anything to protect his family and house. After the battle at the Trident, Ned finds that Jaimie Lannister a sworn protector of the king ends up slaying Aerys at the Iron Throne in an act of betrayal. Ned finds his sister’s newborn child and hides him away from the world to be safe and names him Jon. In the end, Ned’s honorable heart became his downfall. He forgave the Lannisters for what they’ve done during war including Jaimie and his sibling Cersei Lannister. Cersei had Ned beaten up and taken to jail. On judgement day, Jophrey Lannister taken off the head of Ned and even raises his head on a stick to taunt the members of the house.

Everybody knows Vegeta as the prince of fallen Saiyan who was a evil villian in the beginning of the series who turned into a good guy to protect his planet and motivated to surpass Goku in power. In the earlier stages of this anime, Vegeta was part of the Frieza Force and was on a mission to Earth. Along the way, he stops at the Planet Arlia to initially capture the planet for selling. He realizes the planet is already in ruins and therefore is no use to him. In February of Age 762, Vegeta and Nappa overthrow the evil dictator King Moai and annihilates the entire planet Arlia.

The Vegeta from Planet Arlia Funko Pop was released in 2014 at the New York Comic Con and Toy Tokyo. The estimated value of this pop is currently at $2,300 with 588 pieces sold in the last 90 days. The average sale being $657 and the highest sold at $3,200.