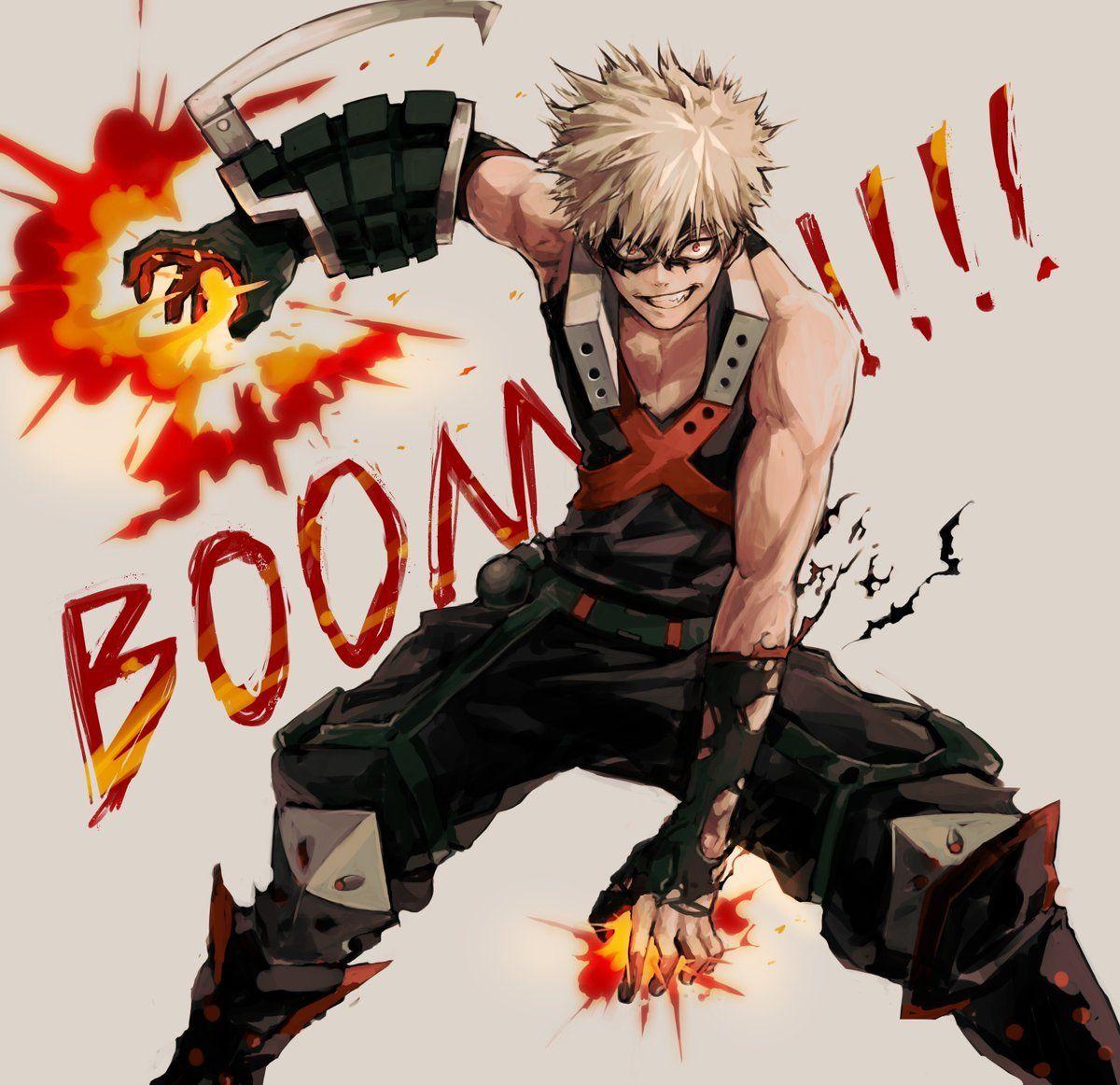 “Stop talking. I will win. That’s… what heroes do.”

Well, the fans of My Hero Academia have understood who said this. So, without any further ado, let’s have an overview of the persona, abilities, and quirks of this very complex character.

Katsuki Bakugo is a student of Class 1-A at U.A. High School. He is nicknamed as Kacchan. He is training hard in pursuance of his aim to be a pro hero. Katsuki Bakugo is the deuteragonist (meaning second most important character) of the My Hero Academia series.

Have a glance at his appearance

Katsuki is a boy of muscular build. He has a fair skin tone and average height. His hair is spiky ash-blond with choppy bangs hanging over his eyebrows all the time. His sharp and bright red eyes add to his overall combustible personality since he’s very known to be a hot head.

Although Katsuki is in school, he is very much known to be the troublemaker or finds being kind to be a drag. He hates discipline which is why whenever he puts on his uniform his tie is always missing. The white collared shirt underneath his blazer has top few buttons undone. He wears loose pants that causes them to drop at his ankles.

Talking about his hero costume, so it comprises of a tight, black, sleeveless tank top along with an orange “X” across the middle that forms a v-neck. The two dots at the left line of his collar indicates the support company who designed his dress.

His costume has a metallic neck brace as well that is worn with rectangular ends. It has three holes on each side. His belt carries grenades that hold up his baggy pants with knee guards, his sports black, knee-high combat boots have eyelets and orange soles. The mask he carries is black and jagged, and when it goes around his eyes, a large and an orange-rimmed flare shape comes out from each side.

Despite the usual tank top, he wears a large jacket in the season of winter. Though there is no same orange “X” design, he is capable of producing sweat in adequate amount for making his quirks work. The more sweat he produces, the stronger his explosive fire powers are. Rather than his baggy pants, he prefers wearing blue jeans plus hero costume while interning under Best Jeanist. Amazingly, his hair was styled well during this period and was parted to one side.

Katsuki is one of the strongest students in Class 1-A. He earned 3rd position in the Quirk Apprehension Test and was placed first in the U.A. Sports Festival and the Entrance Exam by having the most villain points.

The fighting style of Katsuki is an all-out offense. He uses his Quirk’s propulsive abilities to narrow the distance between him and his opponents, then, he bombards close-range attacks that initiate with a robust right hook.

Among other powers, Katsuki is also proficient at using his explosion to force himself through mid-air, blind opponents, and blast at long-range. Mind it, explosions are versatile Quirk, particularly for battle situations. Katsuki can leverage the recoil caused by the blast for mobility purposes.

Katsuki was capable of immobilizing and overpower Kurogiri, a highly potent villain, singlehandedly during the U.S.J. Incident. Moreover, at the U.A. Sports Festival, he defeated Shoto Todoroki and Fumikage Tokoyami who was among the strongest students in Class 1-A.

Katsuki is well-versed in playing the drums. He has also taken classes for playing music on instruments in the past.  Furthermore, he loves cooking as well. With all of that ability, you would think he has some kind of weakness. However, Katsuki possesses a genius level intellect where he has incredible strategic planning and quick improvising abilities. At the age of 4, Katsuki could already read perfectly, as he treats studies very seriously.

What do other Pro Heroes remark about the powers of Katsuki?

All Might and Shota Aizawa noted the sheer amount of potential Katsuki carries and praised his prowess. Because of the legendary powers of Katsuki, the League of Villains tried to kidnap him for being converted to their cause. No matter if it meant sacrificing the Vanguard Action Squad’s members as his potential membership would exceed the risk.

The quirk of Katsuki permits him to secrete nitroglycerin-like sweat from his palms and ignite it on the command that allows him to produce explosions. His strength enhances when he sweats more. As quoted by Best Jeanist, Katsuki has a robust control over his quirks.

Katsuki commonly uses small but powerful explosions from his hands. They blast his opponents, propel himself and navigate through the air. He is able to maintain his explosions long for negating Shoto’s “Heaven-Piercing Ice Wall” and breaking through Eijiro’s hardening Quirk.

Beside, Katsuki sunken his hands into boiling water for expanding his sweat glands to create chain explosions. Thus, it upgrades the scale of his attacks. An overuse of his powers can cause his shoulders to ache unfortunately.

Using explosions and throwing his hands back, Katsuki propels himself. With the power of these two, he increases to ultra speed up in the air for achieving a pseudo form of flight to help increase the damage of his attacks. On the battlefield, he first used this technique in the Quirk Apprehension Test. And using these powers to fly for the first time was during the Obstacle Race.

Katsuki starts attacking by generating a light sphere between his hands that bursts into a large scale flash. The effect of this explosion is the same as an actual stun grenade. Its worst outcome is that the flash of light makes the nearer individuals blind. With this technique, he successfully defeated Fumikage Tokoyami.

Katsuki fires off his Stun Grenade at opponent’s point-blank range to immobilise and stun them with little lasting damage. For the very first time, this sort of attack was used against Setsuna in the fourth round of the Joint Training Battle

The most strong move in Katsuki’s arsenal, Howitzer impact includes taking Katsuki to the air. Later, using explosions for propelling himself in a circular motion that creates a tornado. It builds oxygen to fuel the incoming blast. Once it collides with the target, Katsuki releases the aforementioned powerful explosion.

The Howitzer Impact was first used in the final match of the U.A. Sports Festival Finals. He also showed that he is proficient at releasing the fueled explosion in midair, with no contact with the target.

Katsuki is expert in stretching out his one hand while using his other hand. It will form a circle on the palm of his outstretched hand. He then fires an explosion through the ring that produces a concentrated blast beam. He maintains his focus on his explosion path into a single point. Therefore, he generates an intense blast with reduced area of impact, however, with much power to successfully pierce solid concrete. 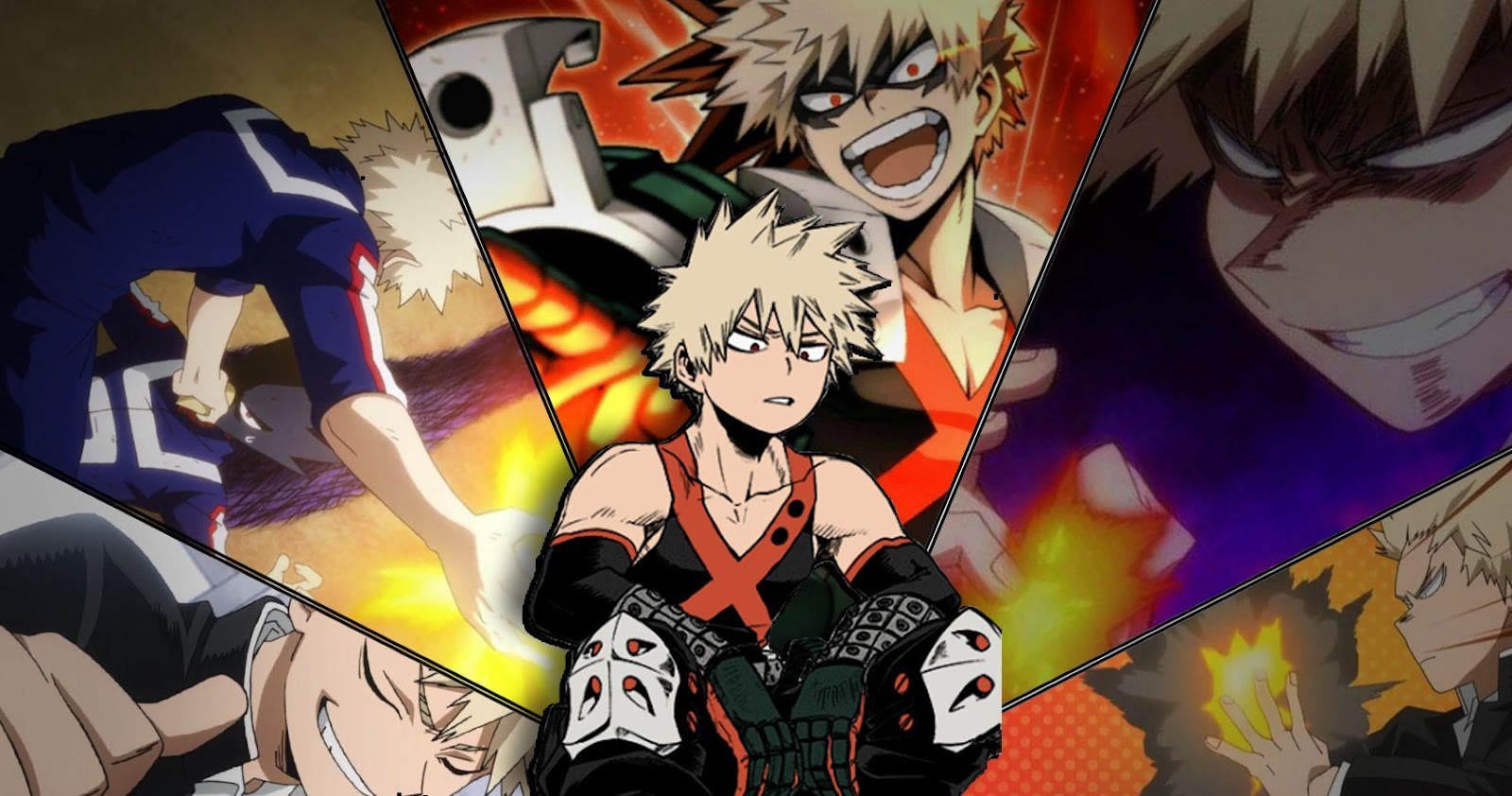