What are Funko Pops?

Funko Pops are small vinyl figures that have an exaggerated bobblehead and extremely large eyes. These figures typically depict famous characters to appeal to fanatics. The characters range from tv shows, movies, cartoons, anime, sports, advertisement characters, novels and more. Pop Vinyls have been around since 1998 and ever since new Pops have been released. Today there are a total of 8,366 different pop vinyls based on a wide assortment of pop culture characters and you’ll be surprised to know this is a $686 million dollar business. People really want their bobbleheads! Sometimes, it isn’t as easy as going online to buy them. Some Funko Pops are extremely rare since only a set number of pop vinyls for that specific version has been released and the manufacturers aren’t making anymore. This drives up the price of these figures and causes a bidding war. In the world of Funko Pops, there’s also scammers who try to make money by selling fake pop vinyls that resemble the real version. We hope to shed light on the basics when it comes to how to begin collecting your set of Funko Pops, how to display them in your home or office and what you should look out for!

How to Display Your Funko Pops

You might be wondering, how should I even display these Pops? Some avid pop vinyl collectors take them out of the box and some of them like to leave them inside of the box to still try to retain its value in case they would like to sell them in the future.

The answer lies whether you plan to keep your Funko Pops forever or simply trade them in the future to get more value out of them. Funko Pops are a hot and sometimes very rare commodity. Therefore, some Pops will go up tremendously in value as the manufacturers won’t make more of certain pops. Owning some of these rare Funko Pops means that you can buy them while they are cheaper and sell them for much more down the line.

If you intend to hold onto the Funko Pops forever, you may take them out of the box and keep the box or throw it away. If you might sell them in the future, I recommend keeping the Pop inside of the box, so that you can say it’s in Mint Condition or Mint in Box. 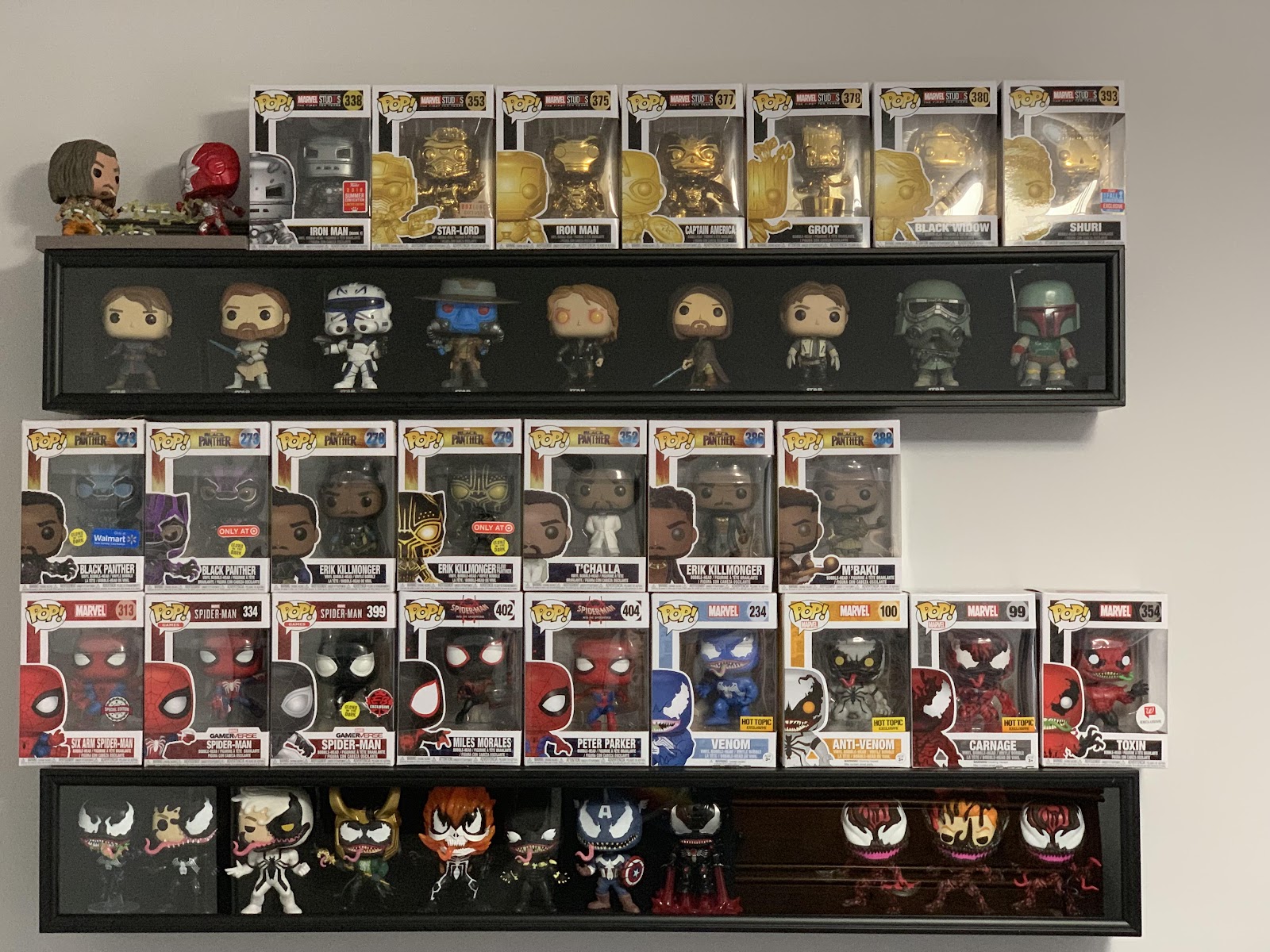 Also consider how much space you have to store your Funko Pops. One way to save space is to take out the boxes and store them elsewhere. And you can simply just display the Funko Pops themselves. You can also purchase various display cases that are sold online to display your pops.

What does an Exclusive Funko Pop Mean?

Exclusive pops simply mean that they are only a limited quantity of pop vinyls made in this version that were released. Typically they come from special comic conventions that release a limited edition pop vinyl into the public. And then a lot of these are traded online for more money in the future. It also might mean that they are only Exclusive to one seller. For example, you may only find certain editions of Funko Pops in Hot Topic and it won’t be sold elsewhere unless someone is reselling them.

What are Flocked Pops?

Flocked pops are pops with a fur-like material on the outside of the Funko Pop to give it a softer feel making the overall texture feel more realistic. Typically these are much harder to find and much more rare as well.

What Should You Collect?

This is all really dependent on your goals of how you want to collect Funko Pops. If you want to simply decorate your place, just collect your favorite ones. There is a Funko Pop Checklist that you can search online to see which ones are available. For example, if you’re a big marvel fan, try to collect all of your favorite marvel characters. You can complete one category at a time before moving onto the next. Imagine stocking your TV cabinet with all Marvel Funko pops, how cool would that be?

If you want to collect rare pops or even sell them it’ll definitely take more skill. You’ll want to ensure you are buying real pops and not getting scammed. Furthermore, you have to search on marketplaces to see where you can find these rare pops. Always check on reliable websites such as Barnes and Nobles, Funko and others. Always know the price of each rare pop, so that you are buying it at a low price. You can use the website Pop Price Guide to see where each version of pop is currently valued at and even sold at.

Where to Buy Them?

If you’re looking to buy Funko Pops in person, you can check the official Funko and use their Store Locator tool to find nearby retailers that sell them. Typically places such as Target, Barnes and Noble, GameStop, Best Buy, Hot Topic and Walmart would sell them. Do your research in advance because not all retailers sell the same Pops. Target might have a different collection of pops compared to Barnes and Nobles. Also a popular place are toy stores which usually have a wider assortment of them.

For official online retailers, some of the most common places are Funko, Amazon, Box Lunch, Pop in a box, fye, entertainment earth, pocket mags, galactic toys, crunchy roll, my toy shop, big apple collections and others. You can also check out online marketplaces such as ebay, offer up, mercari, letgo, 5 miles, varagesale and many more. You may also find them in physical garage sales in your town. Who knows, maybe they would give them away for free too!

How to Tell if the Funko Pop is real or not?

There are many practical tips to avoid being scammed into buying a fake funko pop. First, check that the item number is the same as the one on the official website.

Also make sure the art work is exactly the same as the one online because there could be slight variations. Sometimes Chinese wholesalers might give you a knockoff version that resembles the original with small differences.

Look to see if the titles, fonts and logos match with the ones listed online in the official site.

Also you may ask the seller for images of the Funko pop’s feet. There is always an item number and Funko LLC logo on all official Funko pops.

As a beginner, we hope that you enjoy your journey in collecting Funko Pops. It’s always exciting to receive your first pop vinyl and it’s quite addicting once you add more to your collection. As a bonus tip, I recommend watching YouTube videos on how other people collect their pops and also what are the latest ones to look out for. I’m sure this guide will give you ideas on how to collect Funko Pops and how to avoid common pitfalls.